Since the Emperor Hadrian, against whom they had rebelled, expelled them from what had been their land for a millennium, the Jews had not found a country where they were not persecuted or expelled until, like Christopher Columbus, they “discovered America.” Here they have lived in peace and prospered since the arrival of the first of them in the 18th century. They became the most prosperous immigrant group... until they were displaced from that position by the Cubans, who surpassed them, but without taking anything away from them.

“God bless America / Land that I love”, wrote Irving Berlin, a Russian-born Jew. It would never have occurred to him to bless Russia, as they were kicked there. In America they found a refuge from persecution and expulsion. In America they found a homeland, the only one they had until the creation of the State of Israel in 1948. However, for a long time, American Jews have been voting in a majority, and I speak of an absolute majority, that is, two thirds, for the increasingly anti-American Democratic Party, which, moreover, has been quite lukewarm in its support for Israel.

David Ben-Gurion was forced to stand up to President Truman and tell him that “Israel’s fate is decided in Jerusalem, not in Washington.” Since then, there has not been an American President more in solidarity with Israel than Donald Trump, who, from the transfer of our embassy to Jerusalem to the recognition of Israeli sovereignty over the Golan Heights, has done more for the Jewish State than the twelve leaders who preceded him in the White House, from Truman to Obama.

Well, now we have 600 Jewish organizations that claim to represent 50% of American Jews, and they have issued a statement in support of the thieves and arsonists of Black Lives Matter, bitter enemies of Israel’s best friend and shock troops, along with Antifa, of those who seek to destroy America. The infamous statement also comes amid a wave of anti-Semitism promoted by Trump’s enemies.

What kind of people are these Jews? They are always talking about the Holocaust, but have they already forgotten the Night of Broken Glass, when Nazi thugs rampaged through Jewish shops across Germany? So do the BLM and Antifa, only the Nazis didn’t steal; they only destroyed.

If the Jews of Israel were like this, the Hebrew state would have disappeared long ago and its population massacred by Muslims. But those Jews are different, and for me, a Cuban who lived 32 years under Castroism, it is very easy to understand the difference. Between the cowering American Jews and the brave Israeli Jews there are the same differences, perhaps greater, than those that distinguish the exiled Cubans from the “new men” created by the Castro tyranny.

For me, a product of the Cuba “from before” who lived several decades in the Cuba “from now”, it is easy to understand the differences between the “new men” and us. The Aserequevolás were subjected from their childhood to a process of degradation from which, in general, only those who had a family that could counteract it and that dared to do so escaped. Although there are cases in which only an intrinsic human quality seems to be the only explanation. There are people who cannot be degraded, although, unfortunately, there are not many.

As for Israeli Jews, they cannot afford to play games, and Muslims don’t care whether they are leftist or rightist Jews. The Israelis are irreducible and know that this is the only way they can survive.

By contrast, the American Jews who play leftism, I do not understand them. They are as different from Israeli Jews as we Cubans are from Castro’s new men. And I don’t like them. I don’t like them at all. 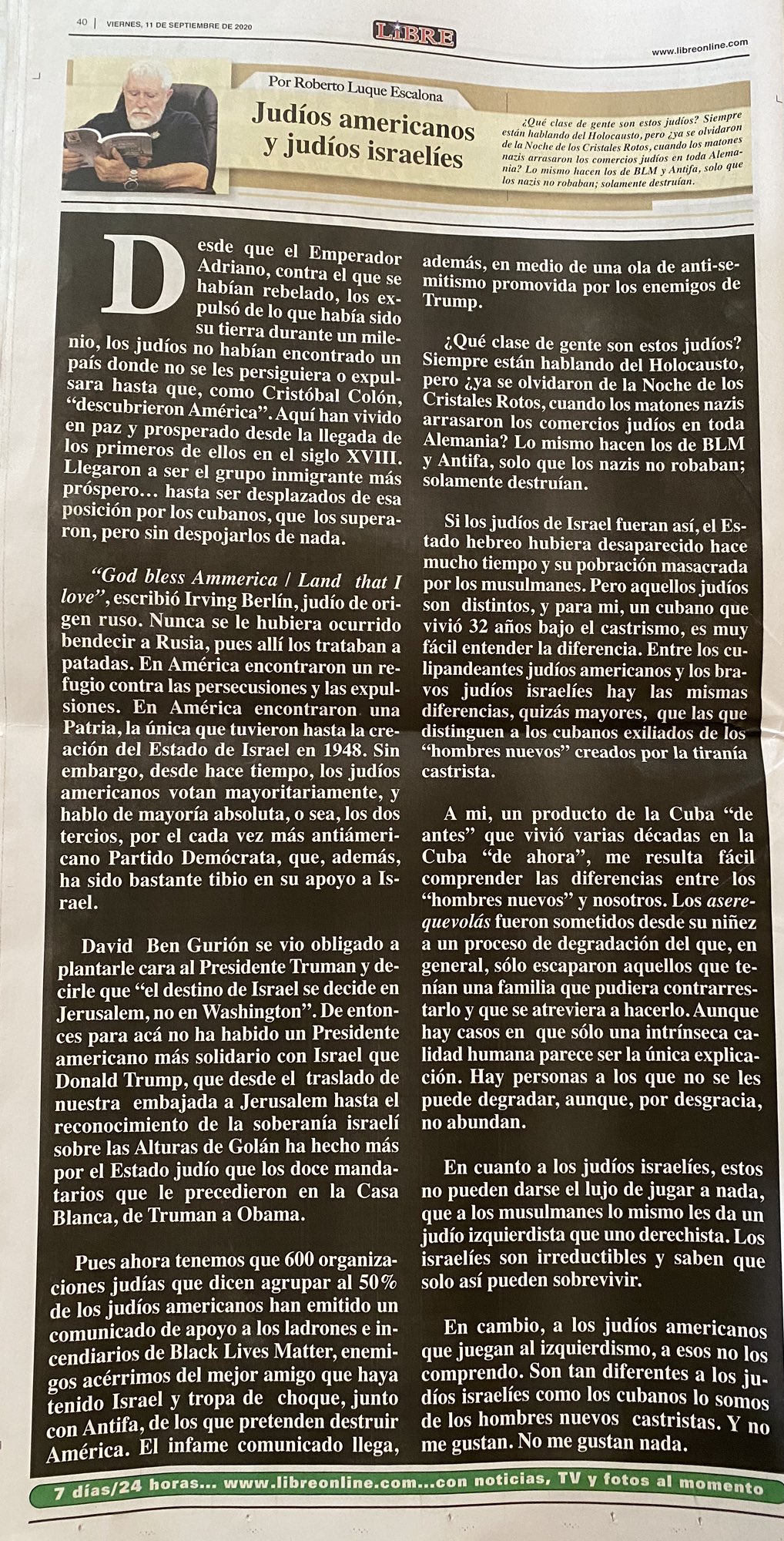